Historically cellular communication has had minimal impact in the industrial spec where technologies such as Zigbee and WLANs have dominated the wireless communication implementations. As 5G approaches, cellular companies are looking at how cellular technologies can address some of the key challenges that have emerged with IoT devices. Internet connected devices in industrial locations have different issues to overcome compared to their more domestic counterparts. 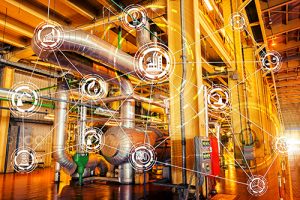 Machine-to-Machine (M2M) communication must overcome more obstacles, both physical and environmental. Taking for example a water treatment plant – there can be physically larger distances to cover which would make the mesh network wireless solutions difficult to implement without a large amount of relay devices. This has been the motivation behind the newly emerging cellular technologies such as Narrow Band IoT (NB-IoT) and LTE-M (also known as CAT-M1).

So what do NB-IoT and LTE-M solve?

NB-IoT has been designed to cover wide areas even when devices are underground or deep within buildings. Devices are low power so they  can run on batteries for 10 years or more without needing to be replaced, creating a maintenance cost saving. National coverage is a key benefit enabling multiple locations to be covered with one technology. The majority of IoT devices only transmit or receive small amounts of data per day. NB-IoT has been designed to offer enterprise-grade solutions whilst being practical to implement, low power and most importantly, low cost. Because they use licensed spectrum bands (just like 3G & 4G) they aren’t significantly affected by congestion or interference, beneficial in industrial environments high in ambient interference.

Security is also a key feature since edge devices have been identified as potential network vulnerability points, at risk of being a hackable entrance into an enterprise network. Both NB-IoT & LTE-M derive from the LTE authentication and encryption security features making them more secure than many WLAN systems. NB-IoT mutually authenticates the network and the device and encrypts the traffic between the device and the core network.

So why have cellular technologies not been used more in the past for IoT applications?

One of the shortfalls of previous cellular technologies is power consumption. Power efficiency is dependent on the devices network reception strength and how much data is transmitted. NB-IoT & LTE-E have power efficiency as one of their core design requirements across the coverage range. Vodafone have validated that lifespans of 15 years can be achieved even at the cell edge (Source: Vodafone.com/iot/nb-iot). Since many IIoT devices are in inhospitable and often remote locations, the challenge is how to maintain these IIoT devices. The answer is self-powering devices.

8power have developed an easy to install, self-powered solution able to monitor industrial equipment such as motors, pumps and gearboxes independent of age, brand, size and model. This enables remote condition monitoring in industrial locations such as water and waste treatment plants, manufacturing locations and oil and gas plants which are often in inhospitable and remote locations. The 8power self-powered solution has no batteries and no wires making it ideal for IIoT devices. Powered by the vibration of the asset (such as motor, pump or gearbox) themselves makes it the ‘fit and forget’ solution for monitoring industrial equipment.